Donald E. Ingber, M.D., Ph.D., is the Founding Director of the Wyss Institute for Biologically Inspired Engineering at Harvard University, the Judah Folkman Professor of Vascular Biology at Harvard Medical School and the Vascular Biology Program at Boston Children’s Hospital, and Professor of Bioengineering at the Harvard John A. Paulson School of Engineering and Applied Sciences. He received his B.A., M.A., M.Phil., M.D. and Ph.D. from Yale University.

Ingber is a pioneer in the field of biologically inspired engineering, and at the Wyss Institute, he currently leads a multifaceted effort to develop breakthrough bioinspired technologies to advance healthcare and to improve sustainability. His work has led to major advances in mechanobiology, tumor angiogenesis, tissue engineering, systems biology, nanobiotechnology and translational medicine. Through his work, Ingber also has helped to break down boundaries between science, art and design.

Some of Ingber’s most recently developed technologies include an anticoagulant surface coating for medical devices that replaces the need for dangerous blood-thinning drugs; a dialysis-like sepsis therapeutic device that clears blood of pathogens and inflammatory toxins; a shear stress-activated nanotherapeutic that targets clot-busting drugs to sites of vascular occlusion; and Human Organs-on-Chips created with microchip manufacturing methods and lined by living human cells, which are being used to replace animal testing as a more accurate and affordable in vitro platform for drug development and personalized medicine. In 2015, Ingber’s Organs-on-Chips technology was named Design of the Year by the London Design Museum and was also acquired by the Museum of Modern Art (MoMA) in New York City for its permanent design collection. His Organs-on-Chips were also named one of the Top 10 Emerging Technologies of 2016 by the World Economic Forum.

For now this text will hold this space

"TENSEGRITY! Some Great Quote by Don"

Wyss Human Organs–On–Chips will be on display at The Museum of Modern Art’s latest Architecture and Design Exhibition, “This Is For Everyone: Design For The Common Good”, until January 2016. They have been formally acquired and will remain in MoMA’s permanent collection. This short video accompanies the Organs–On–Chips in the exhibit space to help explain to visitors how the design of the chips allow them to emulate functions.

In this video, Wyss Founding Director Donald Ingber and Technology Development Fellow Kambez Benam explain how the integrated smoking device mimics normal cigarette smoke exposure and how it can impact research into the causes of COPD and into new biomarkers and therapeutics. Credit: Wyss Institute at Harvard University

Wyss Institute Founding Director Don Ingber, Postdoctoral Fellow Yu-suke Torisawa, and Researcher Catherine Spina explain how and why a they built bone marrow-on-a-chip, and how they got it to act like whole living marrow and manufacture blood cells.

Read More about Tensegrity, the FoundationDon Ingber’s Work with Film

There is nothing like starting off with a bang. In 1867 Alfred Nobel accidentally discovered dynamite after putting a popular but flammable salve on a cut finger.

Rubber was an unreliable, smelly mess until Charles Goodyear mixed it with sulfur and accidentally dropped it on a hot stove. Again, serendipity.

From the X-Ray to Ex-Lax, nylon to NutraSweet, penicillin to the popsicle, and velcro to viagra, the list of serendipity stories is as long as the history of discovery.

Radiologist Dr. Morton Meyers accidentally figured out how cancer metastasizes in the stomach, by watching where dye he injected for X-rays would spread and then collect. He’s written “Happy Accidents: Serendipity in Modern Medical Breakthroughs.”

“Serendipity refers to looking for one thing and stumbling over something else that proves to be of greater value,” he told Sunday Morning correspondent Martha Teichner. “What serendipity means is , an inadvertent observation, a happenstance that a sharp, open mind can exploit to find its true benefit.”

In other words, one must have the brains to recognize an “a-ha!” moment. Dr. Don Ingber seized on that moment when he was studying molecular biophysics at Yale.

“I remember seeing students walking around on campus who were holding sculptures that were made out of cardboard that looked like jewels, and they looked very much like viruses to me in my textbooks,” he said.

So he talked himself into an art class where the professor would collapse the object. Watching the model resume its former shape, he had a revelation.

The models behaved exactly like the cells he was culturing him a science class.

“So they attach to the dish they pull themselves out against it,” he said. “They spread flat and when you want to remove them you clip the resistant site and they spring back and they go from flat to round and bounce off, just like this toy!”

Ingber’s entire career, predicting cell behavior, has been built on that chance observation.

We have Horace Walpole, an 18th century English writer and politician to thank for the word serendipity. Walpole was inspired by a fairy tale, called “The Three Princes of Serendip.” The princes travel far and wide turning every potential disaster into a triumph. Serendip is the old Persian name for what is now Sri Lanka, otherwise known as Ceylon, as in tea, which brings us to coffee.

“So the story goes that Caldi, who happened to be a goat herder, stood back and watches goats eating coffee beans in Ethiopia.” Andrew Smith, editor of the “Oxford Companion to American Food and Drink,” said. “He saw that they really engaged in some strange behavior because of the caffeine.”

Animals, according to Smith, played an important role in early food serendipity. like cheese? Think dead camels’ stomachs. Nomads filled them with milk and hung them from their saddles as they rode live camels.

Smith said he would guess that 100 percent of products we purchase today are rooted in serendipity, like popsicles.

The Post-It Note was also born from serendipity. In 1968, a scientist at 3M made an adhesive that wasn’t very sticky. somebody else at 3M thought maybe it would keep bookmarks from falling out of his hymnal at church; 1,000 Post-it products later a world without them seems inconceivable.

After the fact, serendipity seems so obvious.

Imagine “Casablanca” without Ingrid Bergman. She wasn’t Warner Brothers’ first choice. The song, “As Time Goes By,” almost was cut from the movie. The man who wrote the film’s score hated it and tried to substitute one he wrote but Bergman had already cut her hair for her next film so the scene couldn’t be re-shot.

Speaking of show business serendipity, consider Penn and Teller’s magic chair. It was created for their magic show by the MIT media lab. Sensors in the chair allow its occupant to play music. If that isn’t amazing enough, here’s the serendipity part: what happened when an electronics executive trying to stop automobile airbags from killing children saw it.

“He said, what if you could use sensors in a wireless way to actually determine who was in the seat, what their position was, and then feed it back to the computer in the car and cut off the airbag,” said Frank Moss, who runs the MIT media lab. “And today, almost all airbags in the world, or many of them, are controlled by the device that was originated here at the media lab.”

If there ever was a place literally in the serendipity business, the MIT media lab is it. Its creative culture is carefully nurtured by corporate sponsors who pay for the right to try and spot the next big thing.

“The whole idea is to bring together people with vastly different backgrounds – artists, scientists, engineers, designers, biologists, – have them interact in open play-like environments, not to be afraid of failure, and to build,” Moss said.

Such “breakthroughs” allow Dan Elsey, who has cerebral palsy – who cannot move anything but his head, who cannot talk – not only to compose but to perform symphonies.

“I think only serendipity can change the world,” Moss said. “I think when you open the environment up to where connections can be made that you couldn’t imagine, that the great innovations come that can make a difference for people in society. I think serendipity is mandatory. It’s not – it’s not a luxury.”

But it can be fun. During World War II, tried to make synthetic and failed. Nobody could figure out what to do with it until a marketing genius named Peter Hodgson gave it a name (yes, Silly Putty), put it in a little plastic egg and sold it as a novelty toy.

More than 300 million little eggs have been sold.

Here’s the best part, when Silly Putty turned 50 in the year 2000, it got the white glove treatment as it was solemnly installed in the Smithsonian Institution.

Tensegrity is a term with a rich and sprawling history. It was coined by Buckminster Fuller, the iconoclastic architect, engineer, and poet, to describe his vision of a new kind of architecture, one that looked like it was built by nature instead of by humans. In contrast to the pyramids, columns, and brick-on-brick buildings of the past, which pile solid elements compressively, one on top of the other, Fuller imagined a world full of unconventional structures that maintain their stability, or integrity, through a pervasive tensional force, hence the term tensegrity. 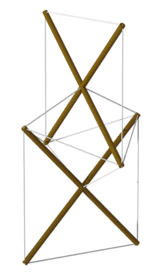 Fuller began developing his vision in the 1920s, at a time when many were exploring new directions in design and architecture. But it was his student, the sculptor Kenneth Snelson, who, in 1949, created the first structure to be defined as a “tensegrity” (Fig. 1). Using two X-shaped wooden struts suspended in air by a taut nylon cable, Snelson captured the defining features of tensegrity: